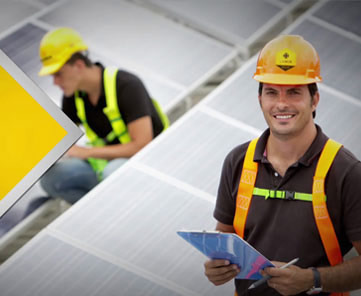 At this time of diminishing natural resources, the whole world is shifting to the most reliable renewable source of energy – the Solar energy. Dubai is in the forefront of shifting to renewable energy with its Shams Dubai initiative. The program was launched in 2015 with a vision to produce 75% of its energy from clean sources by 2050. Dubai Clean Energy Strategy 2050 also calls for iterim targets of 7% of solar powerby 2020, and 25% by 2030. Solar Energy is the future as it is clean, available in abundance and is sustainable. Being an emerging field with a plethora of opportunities, there will be a critical need for skilled and qualified workforce. The course is best suited for industry professionals wishing to broaden their knowledge; individuals or companies involved in PV solar energy; and professionals of any discipline entering the industry and seeking specific skills. Solar PV system training course is designed to educate students in the areas from design to installation and maintenance.

The course shall cover:

About Solar PV systems: a brief

Solar photovoltaic (PV) power systems work by converting sunlight directly into electricity. Photovoltaic (PV) cells take advantage of the photovoltaic effect to produce voltage or current upon exposure to light. PV Cells come in many sizes and shapes, from smaller than a postage stamp to several centimetres across. When light shines on a PV Cell, it may be reflected, absorbed, or pass right through. It is the absorbed sunlight by these PV Cells that generate electricity.

PV Cell is the basic element of a PV Module; each Cell typically produces around 1 or 2 watts of power. To make use of these cells, they are interconnected to form Modules that can produce more power (e.g. 250 Watts/Module). Larger units can be formed by interconnecting Modules in series and parallel. These will dictate the PV system output capacity in terms of kWp to meet a certain electricity demand for various types of Premises.

The advantage of Solar energy is that it is renewable, abundantly available, sustainable, environment friendly, reduces electricity cost, is silent and has low maintenance.

In addition to the solar panels, there are other important components of a photovoltaic system. These components can include inverters, racking, wiring, combiners, disconnects, circuit breakers and electric meters.

A solar panel consists of many solar cells with semiconductor properties encapsulated within a material to protect it from the environment. On either side of the semiconductor is a layer of conducting material which "collects" the electricity produced. The illuminated side of the panel also contains an anti-reflection coating to minimize the losses due to reflection. The majority of solar panels produced worldwide are made from crystalline silicon. Many other semiconductor materials and solar cell technologies have been developed that operate at higher efficiencies, but these come with a higher cost to manufacture.

An inverter is an electrical device which accepts electrical current in the form of direct current (DC) and converts it to alternating current (AC). This conversion is necessary to operate most electric devices or interface with the electrical grid. Inverters are important for almost all solar energy systems and are typically the most expensive component after the solar panels themselves. Most inverters have conversion efficiencies of 90% or higher and contain important safety features including ground fault circuit interruption and anti-islanding. These shut down the PV system when there is a loss of grid power.

Racking refers to the mounting apparatus which fixes the solar array to the ground or rooftop. Typically constructed from steel or aluminum, these apparatuses mechanically fix the solar panels in place with a high level of precision. Racking systems should be designed to withstand extreme weather events such as hurricane or tornado level wind speeds and/or high accumulations of snow. Another important feature of racking systems is to electrically bond and ground the solar array to prevent electrocution.

The remaining components of a typical solar PV system include combiners, disconnects, breakers, meters and wiring. A solar combiner, combines two or more electrical cables into one larger one. Combiners typically include fuses for protection and are used on all medium to large and utility-scale solar arrays. Disconnects are electrical gates or switches which allow for manual disconnection of an electrical wire. Circuit breakers or breakers protect electrical systems from over current or surges. An Electric meter measures the amount of energy that passes through it and is commonly used by electric utility companies to measure and charge customers. Finally, the wiring or electrical cables transport the electrical energy from and between each component and must be properly sized to carry the current.

Off grid solar power plant is a system with battery bank. This type of power plant store unconsumed power in batteries, provided with the solar system. The addition of solar inverter allows this system to convert DC electrical current coming from the batteries into AC (alternating current).

On grid systems are solar pv system that only generate power when the utility power grid is available. They must connect to the grid to perform its function. This type of solar system will automatically send excess power to the grid when solar panels are overproducing.

Hybrid System : Hybrid solar systems generate power in the same way as grid-tie solar system but use special hybrid inverters and batteries to store energy for later use. This ability to store energy enables most hybrid systems to also operate as a backup power supply during blackout.

3. Inverter sizing : For stand-alone systems, the inverter must be large enough to handle the total amount of Watts that will be used at one time. For grid tie systems or grid connected systems, the input rating of the inverter should be same as PV array rating to allow for safe and efficient operation.

4. Battery sizing : The battery should be large enough to store sufficient energy to operate the appliances at night and cloudy days.

Since solar installation involves working with panels and equipment that produce several hundred volts of electricity, there are some very serious safety issues that must be understood before installation. Since there are no moving parts, solar panels require very little maintenance. However, they need to be inspected at regular intervals to ensure that the panels are clean and there is nothing blocking them from efficiently absorbing the sun.

We open on all days.